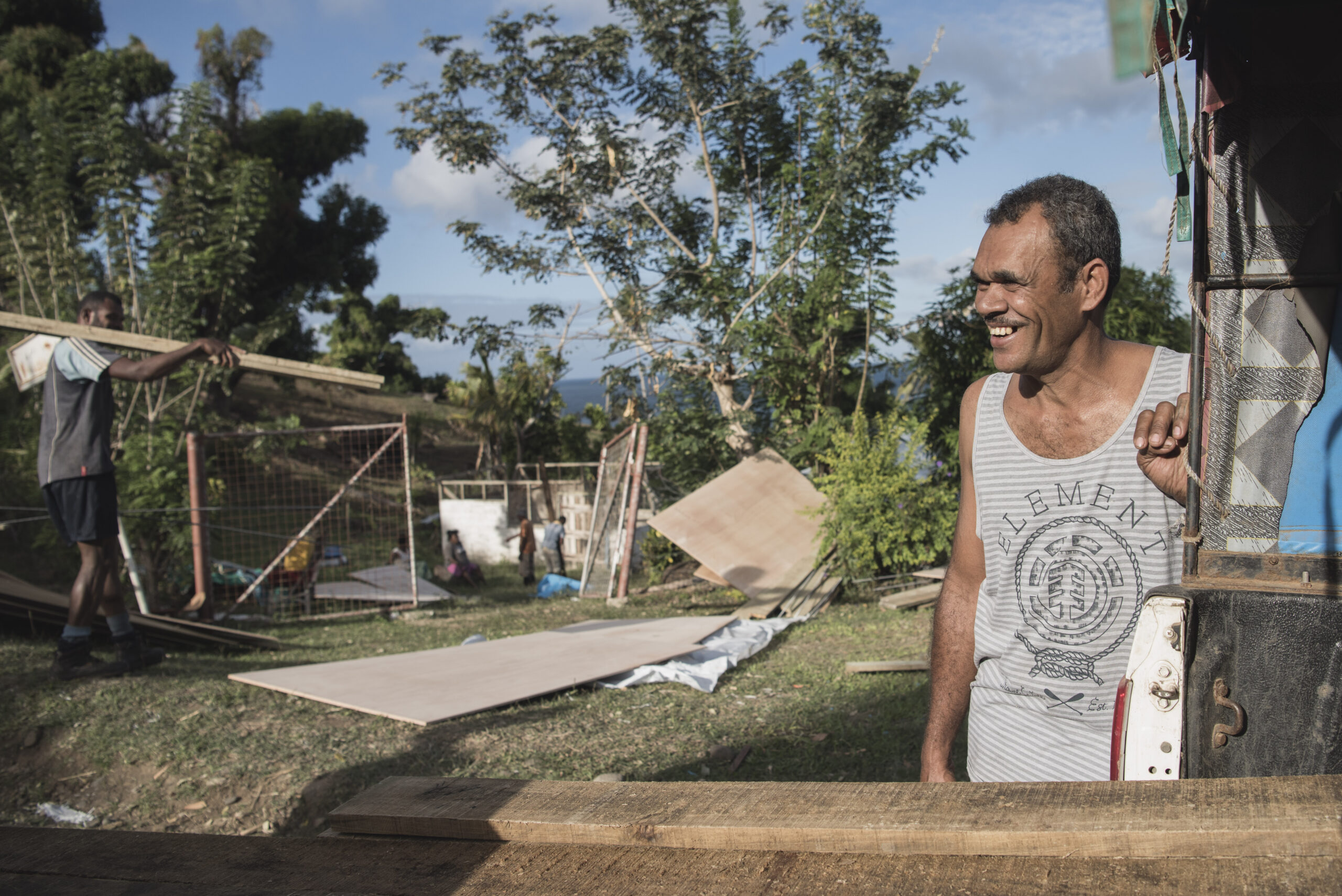 The Namarai community helps transport building supplies from the main road back to their villages to continue the rebuild efforts after Cyclone Winston. The Fijian Government provided support for communities badly impacted by the storm via income support and building materials.

The province of Ra is one of the strongest, most ethnically and linguistically diverse communities in all of Fiji, with over 86 villages and a population of 29,464 (2007 census). And it is also well recognized for keeping keeping traditional Fijian values like vei lomani – directly translated as ‘love in action’ – alive. Rupeni Vatugata, a 74-year old carpenter from the village of Namarai, explains: “When you see someone, you will say hello and share a special respect with your fellow villager.”

It was vei lomani that saw communities across Ra come together in the wake of Tropical Cyclone Winston in early 2016. Winston – the biggest storm ever recorded in the Southern Hemisphere – impacted 62% of the Fiji population and caused F$2 Billion in damage (20% GDP). It killed 44 people, injured hundreds and left 131,000 people homeless. The Category 5 storm first made landfall in Ra, leaving its communities completely devastated.

“I thought that God was returning on that day,” says Raivolita ‘Rai’ Tabusoro, 43, former village headman of Nabukadra, just down the road from Rupeni. “There were many who sustained heavy injuries from flying debris and falling into drains, trying to survive.”

The ceiling of Rai’s home was ripped away by catastrophic winds. He was able to save the life of his elderly mother by placing her in a concrete bathroom, as well as a pregnant woman who he carried to shelter.

“We lost everything. The next morning, the sun was shining as if nothing happened. It was as if a bomb was dropped in the village because there was nothing left, not even clothes were spared. I called everyone and for a moment, we were all crying.”

Asmita Kamal, a 24-year-old teacher from Dagarotu near RakiRaki, found shelter under a table with her grandmother while her family hid under a bed as Winston blasted through their village. Despite their best efforts to secure their house, strong winds swept away just about everything.

“We tried to tie it [house] three or four times. As soon as my brother and father came down from the roof and we came inside the house, half of our roof was gone. Within seconds the other part of the roof was gone. I was very sad and scared. That house, when we were young, my grandfather built it and everything was just gone.”

Rebuilding from the heart

Despite the devastating loss that occurred here, a visit to Ra Province today reveals a population working hard to rebuild with significant progress and community spirit.

“That’s caring for each other,” says Rupeni, referring again to the idea of vei lomani. “To uplift our lives despite the difficulties after the cyclone.”

Rupeni led the rebuilding efforts in Namarai; volunteering his skills as a carpenter and driven by his love of community. Similarly, Rai asked the people of Nabukadra to come together and work hard so the village could return to be an even better place after Winston.

“The old Nabukadra is gone and you can see this is a new Nabukadra,” he says, referring to both the physical and emotional change in his village over the 18 months since Cyclone Winston.

At Bayly Memorial School in Barotu, where Asmita teaches, tradespeople put the finishing touches of paint on new classrooms that were badly damaged during Winston. When the students returned to school, Asmita noticed an increased interest in the subject of climate change.

“Since they have gone through the experience, they are very attentive. They participate and they [speak from their own] real life experiences,” Asmita explains. “Some of the things they could not prepare for [before Winston]. And now they have learned about it, they know if the warning is there what they should do.”

Cyclone Winston is was an example of new enemies facing Ra communities like Namarai and Nabukadra. Enemies that are linked to climate change. Although it has the second largest economy in the Pacific, extreme weather patterns and rising sea levels represent major obstacles to Fiji’s development and economy.

According to the Fiji Climate Vulnerability Assessment 2017, a significant new report produced by the government of Fiji in partnership with the World Bank, in order to reduce climate vulnerability, Fiji needs an investment of over F$9.3 billion over the next ten years. It’s a huge challenge requiring major investment.

Yet the people of Ra are pragmatic but determined when contemplating the future and the changing environment around them.

“We’re all [people in Ra] facing difficult times,” says Rai who is struggling to meet his family’s financial targets some 18 months after Winston took away much of his sources of income. Rai is not alone. On average, 25,700 Fijians are pushed into poverty due to tropical cyclones and floods each year. According to the Vulnerability Assessment, this number is set to rise to 32,400 by 2050.

“I can handle the work and my will power is strong… But my hope for my children, is to strive for their education, their lives and their families in the good future,” says Rai.

“This is a rare thing, but you find resilient people in Ra… Caring for each other,” reflects Rupeni. “One reason why Fiji is paradise is because it’s a country that cares.”

When asked if she thinks she will see a storm like Winston again in her lifetime, 24-year old Asmita is hesitant to answer. “I just pray to God that nothing like this happens again,”she says. “[But] if it does happen in the future people will be strong and they will work hand in hand.”

Read Next Read Prev
Music and Film • Your Stories