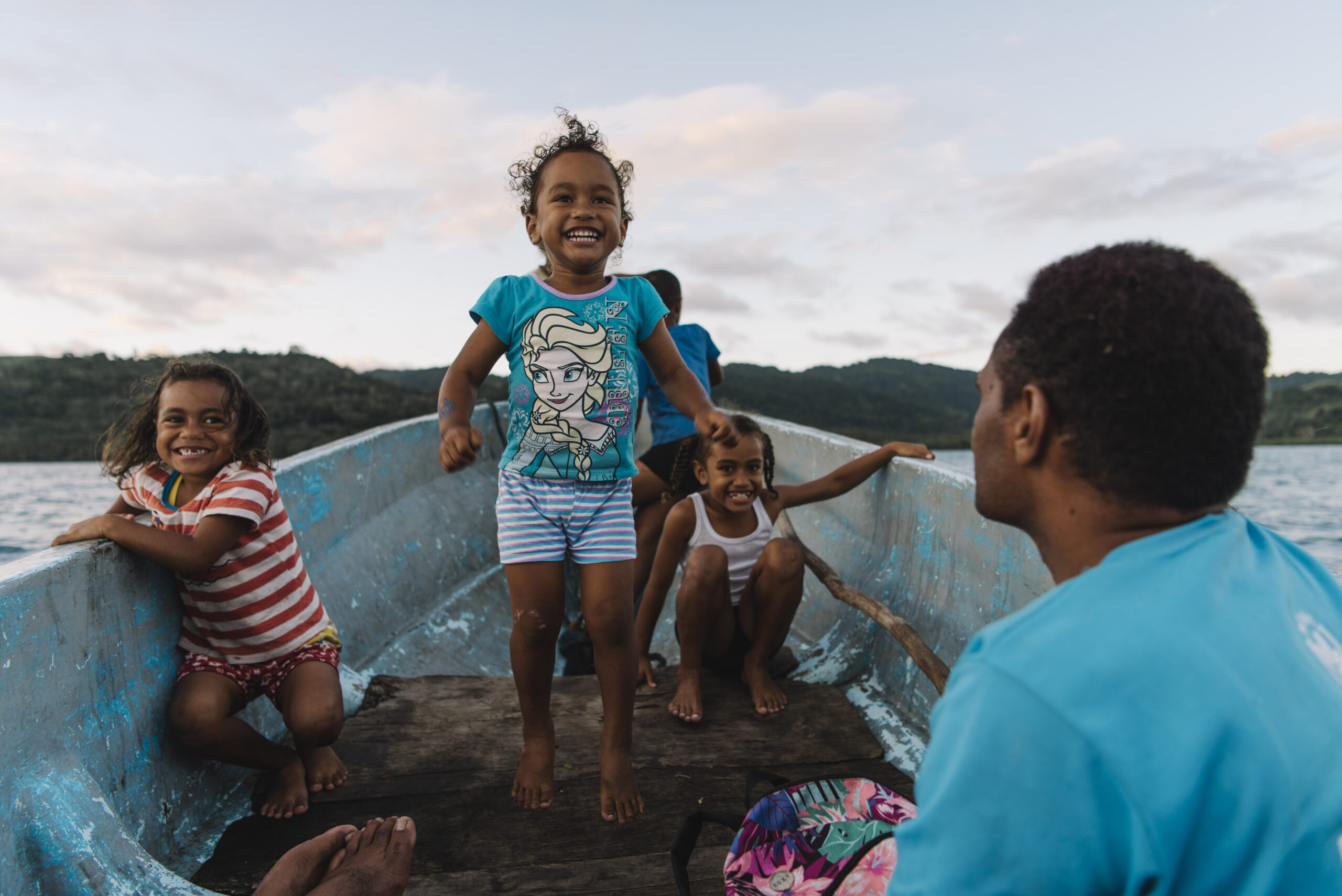 Children from VuniSaviSavi anticipate arriving at their favourite swimming spot, a deep hole in the coral reef called 'The Tomb', not far from shore.

Vunisavisavi is not, at first glance, what you’d expect to be the home of a King. Perched below steep hills, on the south-east coast of Fiji’s second largest island of Vanua Levu, Vunisavisavi is relatively unassuming. Tucked quietly into the landscape, wrapped on both sides by the sea, the village is home to just 82 people. To step foot into the village is a privilege reserved for few outsiders.

“Vunisavisavi is the original home of the ‘Tui Cakau’ and we are proud of that,” says Meredani Koco, a retired head teacher who has called Vunusavisavi home for 23 years. “The whole of [the district of] Cakaudrove is named after this place.”

Tui Cakau – translated directly from Fijian as ‘King Cakau’ – is the title given to one of three paramount chiefs in Fiji, a position that’s been passed down through fifteen generations. For each Tui Cakau, the responsibility to guard Vunisavisavi is personal, because it’s here where the home of the very first Tui Cakau stood, the home of Ro Kevu.

Fijian history remembers Ro Kevu fondly, as the son of a demigod and High Chief. Yet amongst these ancestral grounds, all that remains of the Tui Cakau’s home is a stone hedge that once surrounded it, the rest has been destroyed by the ever-encroaching sea. Physical remnants aside, the deep responsibility to protect Vunisavisavi has not diminished.

“We are the keepers of these ancestral grounds. These lands ancestrally belong to us. My elders were asked many years ago to keep this place, and we’ve been here ever since,”says Sepesa Kilimo, village nurse and descendent of the first settlers in Vunisavisavi.

Time – and a rapidly-changing environment – has not been kind to Vunusavisavi. Rising sea levels, coastal erosion and recent extreme weather is have left their mark here: steps sink far too easily into unusually soft soil, crab holes are scattered across the whole village, and even before low tide, there are visible remnants of what were once houses and a church.  A large, uprooted Banyan tree sits on the shore, long since lost its footing due to coastal erosion.

According to the Climate Vulnerability Assessment 2017, average and extreme sea levels around Fiji are projected to increase significantly this century.

Most models project an increase of 8 – 18cm by 2030. One researcher, Haigh (2017) suggested there could be a mean sea-level increase of 87-135cm around Fiji by 2100. Should these predictions come to light, the impact on communities such as Vunisavisavi, which is actually located below sea level, will be devastating.

This reality feels all too present for mother of two, Pauline Tikoisuva. Five years after having their first child, Pauline and her family were forced to move out of their home on the shoreline of Vunisavisavi. The foundations of the house had become unstable due to coastal erosion and storm surges during  extreme weather.

“That house stood on the shore for over a hundred years. We had our first child in that home and our fondest memories of being a newlywed couple were there,” says Pauline.

When asked how she felt about relocating, Pauline uses the strongest Fijian word for pain: e mosi.

“It deeply hurt my spirit,” she says. “We all cried and even though we had a house rebuilt nearby, we stayed until we were forced to move.”

Four houses – including one for Pauline and her family – have already been built on the cliff that directly looks over Vunusavisavi. While some families have moved, Pauline and her husband have so far resisted.  Instead they stay in a house just 50 metres from their original home, pulled by a desire to stay close to the tight-knit community and cultural connection to ancestral land.

“There is no electricity or running water up there, which makes it hard for us to cook, clean, shower and even fill up the toilet water tanks,” Pauline adds.

Eventually, however, Pauline will have no choice but to relocate. Less than five years since moving, their home is again threatened by the same strong waves that destroyed their first home, but at an alarmingly quicker rate. Twice a year, during king tides, waves push water some 200 metres beyond the shoreline under her house and the others scattered along the coast.

Meredani’s home is also under threat. With the reality of relocation looming, she knows that Vunisavisavi needs support, and soon. Her greatest fear is that young people will leave the community in search of income. “The land has been greatly damaged here, a lot of soil has been washed away by the sea water, taking away the fertile part of it,” she explains, referring to coconut trees that once grew along the shoreline. Many of the families now have plots of land for subsistence farming away from the community.

“The community will be empty. They will all move to town where they can earn money. People will lose their dialect, their language, all the manners (of Vunisavisavi) and all their behaviours.”

Meredani is very aware that Fijians have done little to contribute to climate change.

“We really feel sorry that what has happened has been caused by some others people, by fully developed counties. They are still moving forward, whereas we are still trying to develop and we are being pushed backward by all this.”

Despite climate change’s growing presence, Meredani believes there is still time, still hope, for the people of Vunusavisavi. She beams with pride as she says her community does not plan to go down without a fight. “In some ways we feel safe, because we haven’t been struck by the big waves, but we don’t know what will happen if nothing is done now.”

“We have to be resilient: plant more trees, reduce the burning and cutting of trees, and planting more mangroves.”

“This is a special place, and we will do everything we can to make sure our future generation have the same benefits that we enjoyed, growing up near the ocean on royal ground.”

Read Next Read Prev
Music and Film • Your Stories