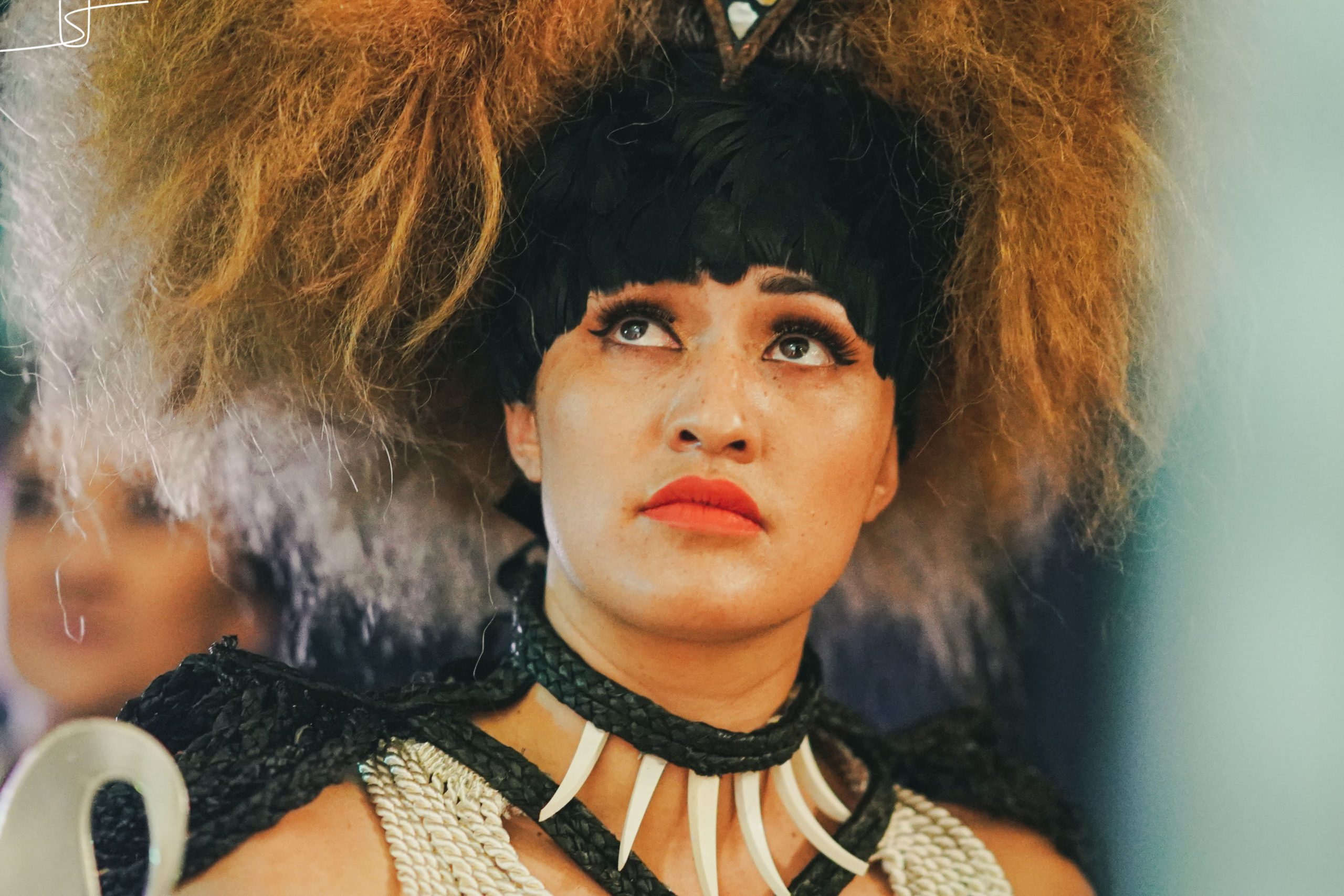 The year is well & truly underway and Pacific Runway has announced that they’re accepting applications after another hugely successful year.

Talanoa’s associate artists, Taofia Pelesasa & Sela Vai, went along to the 2019 runway to connect with designers, models, audience & small businesses to learn about their journey to creativity, what it’s like to be involved with Pacific Runway and who to keep an eye out for!

How are you incorporating your culture and traditional values into what you do – into your practice?
I’ve always been inspired by Pacific design and art and it’s what I based my business on.

As a creative – how do your designs as a creative tell your story?I think I go off personal experience. “The Lady Sei” It’s all about being proud of being Samoan. Being teased as a younger Pacific Islander back in New Zealand.  And I just want young girls to be proud to be brown and as beautiful as you are. Our quote is “For you are beautifully and wonderfully made” and it’s inspired by scripture and it’s the reason why we came up with “The Lady Sei”.

And is this your first time with a stall at Pacific Runway?
It’s my first stall ever. We just moved here from NZ at the end of last year so it’s been an amazing experience meeting other artists.  And a good way to get involved in the community.

Yeah, and just to get myself out there.

Obviously it’s your first time putting yourself out there in Australia – how is it for you to feel welcomed in a community of other pacific people who are doing what they do and putting themselves out there as well?
Being amongst other Pacific Islanders and amazing designers shows that there is a lot of potential out there and it’s good that’s it’s coming up and that there’s a platform here.  I’m from Wellington so we don’t hear much about what’s happening out here so it’s amazing and beautiful to be a part of. Seeing everyone come together. Sydney’s such a big place compared to back home so these events are so important.

Thinking back to how to shared a little about being teased about being Samoan, or being Pacific – what advice would you give to anyone who may be encountering the same struggles as you did?
To learn about who they are. To be proud of where they come from. You know, that we come from a culture that lives off generations of prayers and don’t forget where you come from and what your worth is.

I can’t speak Samoan fluently and so this is a way that I give back culturally. I also import things from Samoa and from around the Pacific. Everything I do is for our culture.

That’s cool that you import from businesses back in the Islands when it could be easier to get it from local manufacturers here?
Yeah, there’s amazing craftsmanship and amazing skills- it’s just about showcasing it to the world. That’s what I’m all about. Owning it. Stepping out and following dreams.

What brought you here tonight?I’ve previously worked backstage styling but this time we came to support.

I guess for you seeing it grow over the past few years how is that a local Pacific person in Sydney important?
I come cause I have great pride of my heritage and am supportive of anything Pacific and its one of the only exposures I have of culture in Sydney. I live not far from here and so it’s not something I get to experience a lot.

How was it having worked backstage and seeing it from that perspective and now as an audience member and how do you receive the show differently?
I guess there’s a different level of pride from having involvement to being a spectator. It’s nice to just sit back and relax and take pride in the show.

You said earlier that there aren’t many events in this city that allow you to show pride as Pacific people – why is this event as the biggest Pacific event in Sydney important and how do we grow from here?
I guess it’s not just an event- I guess it’s our people coming together. It’s about exposing our cultures to the wider Australia. I think what’s missing in Sydney is public forum.  So this is really like a platform for Pacific people to come together and showcase their talents. When you think about it Indigenous Pacific people have so much talent but we don’t realize that when you’re in Sydney because we are subject to so much whiteness. But when you think about this event – it’s so important because we remember who we are as people. Not just because it’s a fashion event but because we have culture – because so many people don’t have that.

I grew up in New Zealand and we were surrounded by Pacific cultures from all over the Pacific so this event reminded me of my childhood. It reminds me of the people of the Pacific all together. It’s important to remember.

I’m half Maori, half Samoan. I was born in Whangarei, Aotearoa and I grew up here. Moved to Sydney when I was 7 so I’ve been here ever since but go back and forth because my Grandparents still live over there. Just in August was my first time in Samoa – it was amazing. I went for my husbands family reunion and we only got to go for a short amount of time so I want to go back to be able to go and see my family and see where my grandfather grew up and things like that.

It was such an amazing experience and I came back really ready to do the show and re-inspired. I can’t explain it. But it took me 32 years to get there and now I’m like “every year I need to go back” to take my children and take them on that journey and with this show – my kids are here today that theyre able to come and be part of it and feel a sense of pride in who they are and grow up and know who they are and their culture.

It’s quite difficult to maintain cultures here – how do you feel as the creator of this event you remedy that and run it as not just simply a fashion show but a pacific fashion show?

Well for me it’s been a learning journey in order to keep the culture alive as well. And I think having everyone onboard as Pacific and Maori – behind the scenes, the models, the media – that’s a showcase of our talents across all areas. And I know when we started in Campbelltown it was a smaller event and now seeing how its grown and how so many more people who want to come and get dressed in their cultural gears and that makes me proud. Especially in a space like Carraigeworks which is well known in the Australian eye – and to just feel comfortable and a sense of pride.

What is the point of difference between when you started and now and how you feel about maintaining the sense of culture?

When we started it was just some friends who were into fashion, some friends who were into hair and makeup and we just wanted to do something fun. It was just a fun show y’know. I never thought it’d continue after that. It’s still fun now but just on a whole other level. So, the growth that’s happened through the process within myself and the team that its important to share that “this is how we started” so people don’t feel like “Oh, they’re are too advanced or high market for us we cant be part of it – we need to be designing for 5 years to be a part of it” and we want them to know that the opportunity is also for emerging – students, small businesses, everyone. Just giving them the opportunity to showcase their work and culture.

You went to Samoa for your first time in August – how have you approached this show differently to previous shows?

When I grew up here  – you go to Australian schools and there’s not many of you brown kids around. So, the culture is there when you’re with your family but at school there was nothing so for me it took me so long to get to Samoa because I didn’t have a hugely strong connection. So I was lucky when my husband was going and I said “I wanna go and I wanna take my kids”. And before I left I was preparing myself, making sure to connect with my family – my Dads siblings and asking questions around where we were from there so I knew where I was going and what I was walking into. And when I got there and saw the way they live and interact – it was emotional I can’t even talk about it. I think being a mother and seeing my kids interact and embracing it and not being able to do that myself as a child that showed me that I need to keep that up and keeping them connected and that they culture stays alive in them.

And I came back feeling so inspired and also wanting to find ways to support for businesses there that might need a platform.

I approached businesses there – like small family businesses, people selling things at the markets and brought some of their stuff with me here to sell on their behalf – because you know they live in the Islands and there isn’t great exposure for the things that they do and create and wanted to support that.

What do you see for the future of Pacific Runway?

Now that we’re getting more Australian mainstream media who are beginning to recognize that this an event that they have to be at – for example last year we had Vogue Australia here and I remember her saying in the interview she had never been to a show where there were women and men of all sizes or where they acknowledged their back of house staff.

At the end of the show we bring them out – so everyone knows who was involved and who was working here. For me I’m hoping that our people, our designers start getting invited to mainstream fashion shows so that they can start trading in actual stores and shopping centers and not just trade from home or from other places. It’s just a stepping stone but we will get there.