Amie Batalibasi and Blackbird the Film 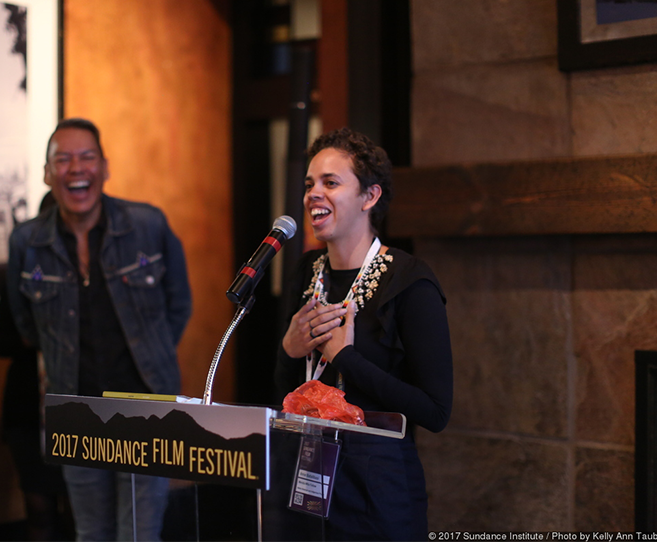 I’m Australian Solomon Islander writer, director, producer based in Melbourne. I grew up in Queensland, Australia and my cultural heritage lies in the Solomon Islands (Feralimae/ Kosi tribes).

How did your story as a filmmaker and storyteller begin?

Now that I think about it, the first film I ever made was basically a documentary about my life in Brisbane at age 18. I made it so that I could take it back to my village in the Solomons and share a bit of what I was experiencing in Australia with my family in the Solomons. I edited it on VHS players and we screened it on a small television with a generator at night to probably hundreds of people! I was always borrowing the school video camera, or whoever had a video camera and documenting things – we didn’t have mobile phones with photos and video when I was growing up, so I had to find whatever I could. Also, I found photography at an early age. I was 10 when I had my first Kodak 35mm point and shoot camera.

But it took me a long time to realise that it was something that I loved so much and wanted to pursue it as a career.  I didn’t understand that being an artist or filmmaker could be a legitimate career – I mean it’s still a hard concept to grasp. I thought I wanted to be a journalist! I eventually did an undergraduate degree in art photography graduating in 2004 and then later did post graduate studies in film. I feel very lucky having the opportunity to study in Australia because I know it’s much harder other Pacific nations. So my pathway into film was through study, but I know that you can get into filmmaking without formal studies, especially now that technology is more accessible.

Through your work, and films like Blackbird, how do you hope to make a difference?

My short film Blackbird is something that is very close to my heart and I’m currently writing the longer feature film version of this story. It’s so important to me because I studied for over 13 years in the Queensland education system and the fact that from 1863-1904 around 60 000 Pacific Islanders were taken from their homelands and brought to Australia to work on the cotton and cane farms, wasn’t mentioned once, not once! And I grew up in an area where the history took place.

I know that this history is still not taught sufficiently in our school system. It’s a story that has remained unknown by the wider public for so long and the Australian South Sea Islander community in Australia is doing amazing things to help change that. I hope that my film Blackbird can be a part of that change.

I believe that storytelling through film has the power to provoke thought, discussion and create change. And that’s one of the reasons I’m a filmmaker. A lot of my work has themes of social justice, human rights issues and I work a lot with culturally diverse communities. Film is the medium that I’ve found to tell stories about the change I want to see in the world.

Filmmaking is quite honestly, an extremely challenging profession. I literally cannot choose what has been the most challenging experience because every step of the way is difficult. But I can comment on what gets me through those challenges and its two things: hard work and persistence. I finished my studies in photography 13 years ago and I’m still going! You go through periods of work and periods of no work, it’s a rollercoaster ride but I really like rollercoasters! Haha!

And I can say that right now, I’m so grateful to be recipient of the Merata Mita Fellowship through the Sundance Institute Native and Indigenous Film Program. Merata Mita was such an inspiring Maori woman, the first indigenous woman in New Zealand to make a feature film. As I write and develop my own first feature film Blackbird, it’s an honour to follow in her footsteps. And as part of the fellowship I was able to attend this year’s Sundance Film Festival in Park City, Utah (the coldest place on earth that a Pacific islander could think of!). That was a dream for me because I’ve wanted to go to the festival for a long time. I was able to meet amazing people including inspirational indigenous filmmakers, see some of the best independent films from around the globe and make connections with industry professionals.

And all credit to Bird Runningwater and the team at the Native American and Indigenous Film Program. It’s clear that the Sundance Institute is committed to lifting up the voices of indigenous filmmakers. I feel that with this current recognition of my work through this fellowship, being able to develop my feature film, they’re acknowledging that the story of Blackbirding in Australia and the Pacific is one that needs to told.

Over the last 10 years I’ve been teaching filmmaking in a community arts context working with culturally diverse communities, Indigenous and Pacific Islander communities, people from refugee backgrounds, children and young people. Some of the projects are: The Short Film Project, Pacific Stories, Young Media Makers Project, Australian South Sea Islanders Stories, Wantok Stori, Pacific Stories: Harmony on the Murray amongst other projects. This work is hugely important because I think that it’s integral for others to be able to tell their own stories, it’s such an empowering act.

One of the most rewarding things as a filmmaker is being able to share my skills with others and learning from the people and communities I work with. There is such a generosity of story when you make films together, it’s a two way street. And for me, the best part is: after we’ve done all of the hard work, people have written and directed their own films and then we get to show their work to an audience. I love watching the first-time filmmakers in the room when their work is screening to a crowd. I love seeing them stand in their power through telling their own story. It’s so unbelievably moving because these are the voices we don’t see in television or film here in Australia – but up there on the big screen through our community projects we’ve tried to provide a small but important platform for those voices.

I feel privileged to have had the experiences I’ve had, and to study what I love and do what I love. So my learning has been to share that with others.

What are the biggest misconceptions in your line of work? How do you feel we can address them?

I’m not really too sure how people perceive what I do. But I do find it hard to answer that question: What do you do? Because I write, direct, produce, teach and mentor, sometimes I volunteer on film projects in various roles, and I run a community creative hub called Colour Box Studio amongst other things. So sometimes it’s hard to define what my ‘line of work’ is. I kind of change hats to suit the situation!

When you look back at your life in 20 years’ time, what do you hope to be most proud of?

This is a hard question for me to answer because I don’t really plan too far ahead in my life. I guess I just try to do the best that I can. I will always stand up and say something when I see an injustice and I will always try to work collaboratively, fairly and honestly. I think that’s all I can do for now and hope that somehow in the future this can be impactful in terms of our cultural conversation and in terms of lifting up the voices of the people and communities that I work with.

What advice do you have for young Pacific people who might be thinking of pursing a similar pathway?

If film is something that you want to pursue, do it. It’s a hard road but if you love it, you’ll find a way. Find your point of access. It might be just borrowing a video camera from your auntie and making a film, it might be taking photos or videos on your phone; it might be making films at school or church. It might be studying film, but it you don’t have access to study opportunities then find people who you can learn from. Some of my greatest learnings have come from people who have mentored me, people who I know have more experience than me and I’ve asked them for help. There is a lot of generosity between filmmakers, so don’t be afraid to talk to them. I’m still at the stage where I’m sometimes volunteering my time, just so that I can get on set and learn. Find volunteer or internship opportunities, or create them yourself by contacting filmmakers, TV stations etc.! Get together with other people who love film, this is your support network, make things together, and get a YouTube or Vimeo channel. If you want to fund a film, do your research and launch a crowdfunding campaign, do a local community fundraiser. Learn online. I listen to a lot of podcasts with directors and filmmakers – I’ve learnt so much this way. Write, paint, sing, read, dance, blog, make art, see art, watch films. Tell your story. Don’t be afraid to use your voice. Your voice is important. And more than ever we need to hear Pasifika voices in film!

We’d like to thank Amie for sharing her story – we wish her all the best, and can’t wait to see where her journey in filmmaking and storytelling takes her now and in the future.

This is Us: Savenaca Ruata