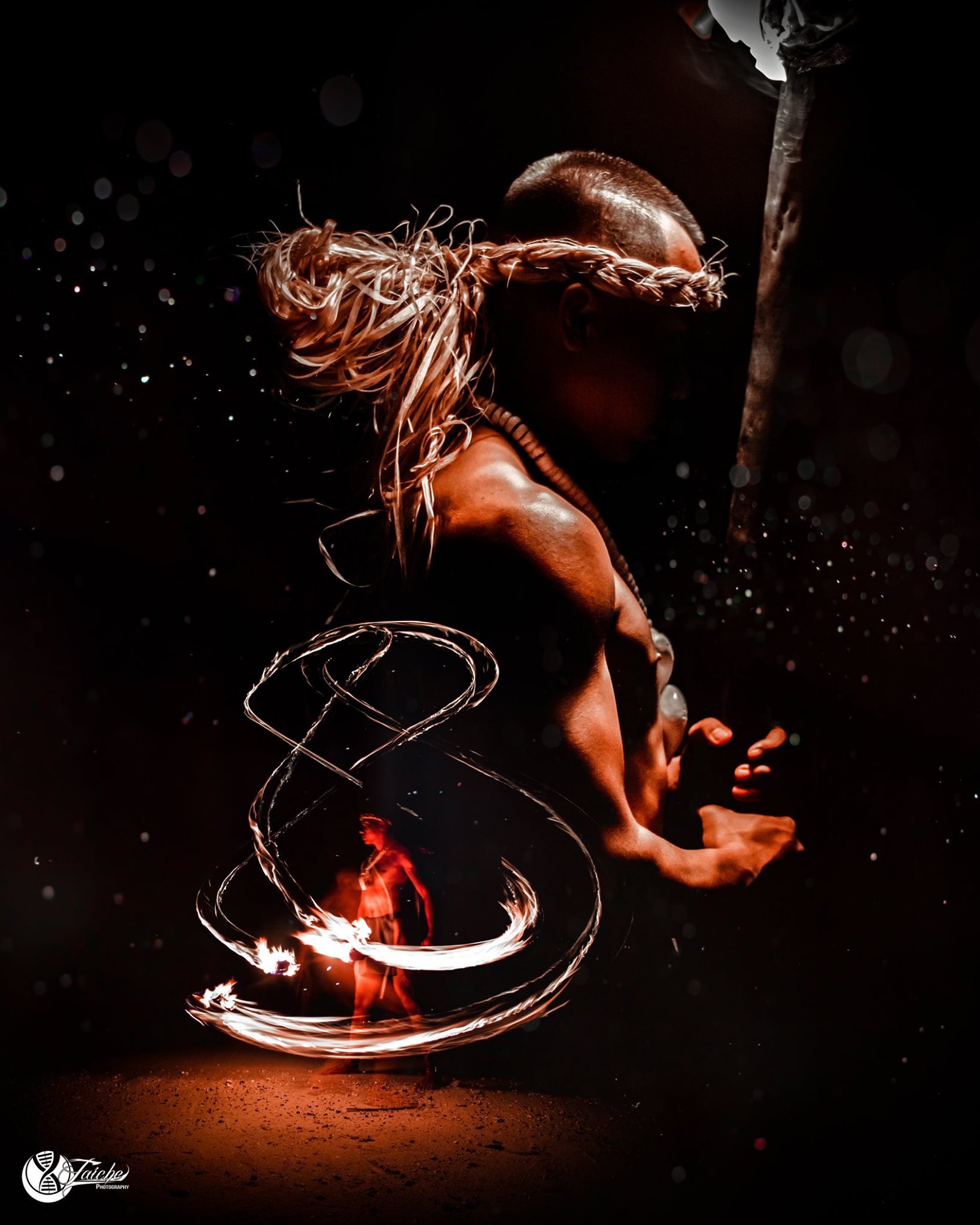 Rudolph Cruz Rivera II is the founder of Taiche’ Photography, hailing from the Marianas Islands in Guahan.

Prior to picking up photography, I dabbled in graphic design.  At 16, My father Rudolph Rivera Senior bought me my first laptop and digicam.  The laptop had preinstalled Adobe programs and other graphic software.  I would spend a lot of time learning how to use it and being familiar with the different tools and effect.

When I got the hang of it, I started to replicate the images on movie posters and dvd covers.  Ontop of photo manipulation and compositing, I was able to understand photo editing such as shadows, contrast, exposure, etc.

ACHAGIGU
at the same time, simultaneously

Years later, I joined a CHamoru cultural non-profit organization whose mission was to promote, preserve, and perpetuate the CHamoru culture and traditions.  I was in charge of producing their website and in doing so, they gave me access to their archives.  On the graphical side, it looked great, but I also felt it was missing something, something I had yet to fully understand.

That same year, I was welcomed to be a member of a guma’.

The guma’ are cultural houses where CHamoru language and cultural traditions are taught.

It was through this guma’ I began to realize that the “thing” I was missing.  It was a clearer understanding of who I am and my purpose in this movement.

One day, while making a flyer for an event, the Creative Director of the organization happen to glance at me and saw how I worked.  I was getting images from google and other websites to put in our flyer.  He sat next to me and asked if I had any photos that I’ve taken to use on the flyer.  To which I said confidently “No, but there are a lot of photos on google anyway.  I can just get from there.” He shook his head and told me

“What is the value of your work if you’re just going to use other people’s photos?  Are you comfortable knowing that you have to take from others?  Take control of how others see your work by using your own resources.”

This conversation was engraved in my head and stuck with me ever since.  That’s when I started to save up to get me a higher quality camera. The man who told me that is Frank Rabon, Master of CHamoru Dance.  Along with my father, he’s one of the wisest and wittiest CHamoru men I know and helped me see the value of being an indigenous native of Guam and the Marianas.

Soon after, I told my father I wanted to save up and invest in a new camera.  I remember asking if I can be excused from my financial responsibilities for the month and he said no.  His answer wasn’t what I was expecting, but I told myself that I would just have to wait and keep saving.

The next day, my father left the bill I have to pay on the table.  Inside the envelope was the bill for $150 and $850 in cash with a note paperclipped to it saying “Keep the Change”.  Needless to say, I got my first DSLR camera that day.  A Nikon D60.

In the coming weeks I began to learn the ins and outs of my camera.  Like how I taught myself how to use the software, I did with my camera.  From landscapes to candid shots of people weaving coconut leaves, my camera was attached to me at all hours of the day.

As the earth flourishes with new life
It’s generosity is now to be seen
-“Para Unikun Chamoru”, Taiche’

MAPEDDE
defeated, to lose, have at a loss, to be beaten

Soon after, my purpose became clear.  Guam has been misrepresented for many years and its time the world saw us for who we really are!  For so long have we been misidentified, misrepresented, and told “WHO WE ARE” by people who are not of our own.   I also realized  that social media and online activity plays a big part in todays society.  So, whenever I post a photo or video, I caption it in our language with English translations.

All this could not be possible without the co-operation and participation from the Chamorro cultural practitioners.  It’s through them, the CHamoru language, traditions, and culture survives in the new millennium.

Unfortunately, I’m only able to capture snapshots of them.  There is a lot more to them than just an islander in traditional wear.  You wouldn’t know that some are teachers instilling cultural knowledge in the public-school system, crafters who can produce something as small as jewelry to a 100-person sakman (large canoe).

Guma’ Taga
Tini’an, Islas Marianas
•
Largest latte house in the Marianas
Found nowhere else in the world, latte first appeared in the Mariana Islands about 800 years ago, during a period known as the Latte Era of CHamoru culture. Each stone is comprised of a vertical pillar (haligi) topped with a hemi-spherical capstone (tasa). Organized in two parallel rows of three to seven stones, the latte stones likely served as foundation posts for wood and thatch houses that were built on top of them. Representing the apex of CHamoru latte architecture, the massive stones of Taga House, located in Tinian, are fifteen feet in overall length.

Over 400 years of colonialization, our island’s history was poorly documented and forced a new narrative by people seeking “control”.  By combining my technical knowledge with my indigenous heritage, it’s my mission to correctly document, archive, and share the CHamoru people…my people.

Talanoa are proud to partner with Tåhdong Marianas

Towards a digital Ocean