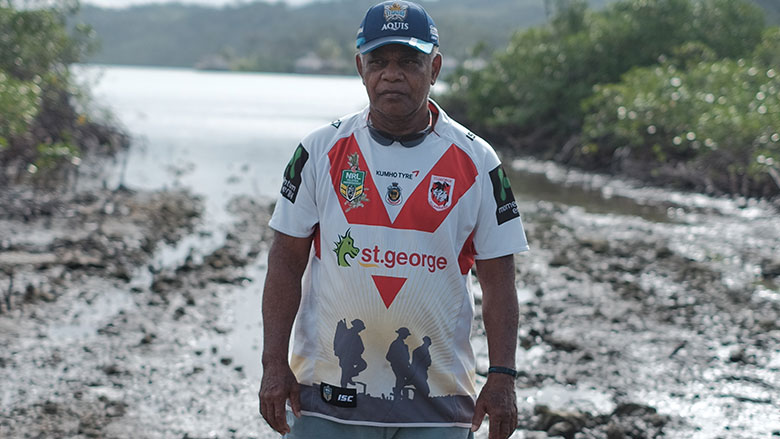 The day before Cyclone Winston hit, Luke Tuibua and students from Deakin University (Melbourne, Australia) were hard at work planting mangroves along the coastline near Luke’s village Waivunia, on the coast of Vanua Levu, the second largest island in Fiji.

Mangroves combat coastal erosion – the complex underground root system helps to bind and build soil, while the above-ground roots slow down water flows and can help with storm surges.

But twenty-four hours later, category five cyclonic winds and heavy storm surges had erased all of their efforts. The experience hasn’t deterred Luke from his mission, however. In fact in some ways he sees Cyclone Winston as positive; an opportunity to start fresh, do things right and leave a lasting legacy for future generations.

Luke is a co-founder of the Waivunia Marine Park, an initiative set up by Naivuatolu Cooperative Limited, a group of people from Luke’s village who are customary owners of the land and ocean surrounding Waivunia.

“After seeing the abundance of marine species decreasing, I became concerned. When I retired, I started pushing really hard to increase sustainability in the village. And after witnessing evidence on television and the radio about diminishing resources and climate change, I think there will be a lot more villagers that will be joining us as well,” says Luke.

The independent cooperative is the first in Fiji’s history to hold an official government license for their project, which means they can prevent fishing in an area 600 metres from the foreshore to the break in the reef. The cooperative work hard to protect this area and preserve marine life, which was dwindling before the license came into effect.

Naivuatolu Cooperative has also identified species of fish that are close to extinction and have worked with scientists abroad to learn about how to boost them. Their conservation efforts don’t stop at the ocean, they also look at how to reduce the cutting down of trees, the use of fertilizers and the burning of land.

“The project we are working on is focused on conservation of resources, renewables and trying to put in place a resource that will sustain the lives of these little ones walking about this village now. Climate change is coming and it’s not easy trying to influence people – they’re in their comfort zones – but I am surprised at how many have come on board.”

Many communities in Fiji rely heavily on traditional knowledge to conserve their environment. While Luke and the cooperative recognize and value these traditional practices and truths, what makes them so unique is that they’ve collaborated with scientists, ecologists and marine conservation experts from around the world to understand why they were experiencing an extinction of certain species of fish.

Luke says that before these collaborations, he was unsure as to whether these extinctions were caused by overfishing, pollution, or climate change. He now has a better understanding of how climate change may impact the natural resources of Waivunia.

“Climate change is coming and it’s not easy trying to influence people – they’re in their comfort zones – but I am surprised at how many have come on board,” he says.

Having already received government support, Luke is now looking to further expand the work of Naivuatolu Cooperative Limited. They want to see more protected marine and forest parks and sustainable fishing practices not only in Fiji, but worldwide.

“It isn’t about getting lots of money in your pocket, it’s about enjoying what you have and if you want to keep on enjoying it then live smartly and conserve whatever resources you have.”

He adds that educating young people is crucial to sustained success in combatting climate change.

“We want to instill in the next generation information about resources. If we abuse resources what will they have in this village? Those are the things we need to look at because we all care about our young ones and if we don’t show them the right direction it is going to be haywire.”

Encompassing a 360° virtual reality video and this site, Our Home, Our People explores climate change vulnerability and resilience in Fiji through the stories of four people. Combined with findings of the Climate Vulnerability Assessment 2017, the memories, hopes, fears of Asmita, Rai, Rupeni and Catalina show us how rising sea levels and extreme weather impact Fijian people today, and what support is required in the future.

As part of Our Home, Our People we also met with Mr Luke Tuibua from Waivunia, who shared his story of the Waivunia Marine Park. Photography by Tom Perry, words and storytelling by Arieta Tora Rika.

Fijian Women of The World Feature