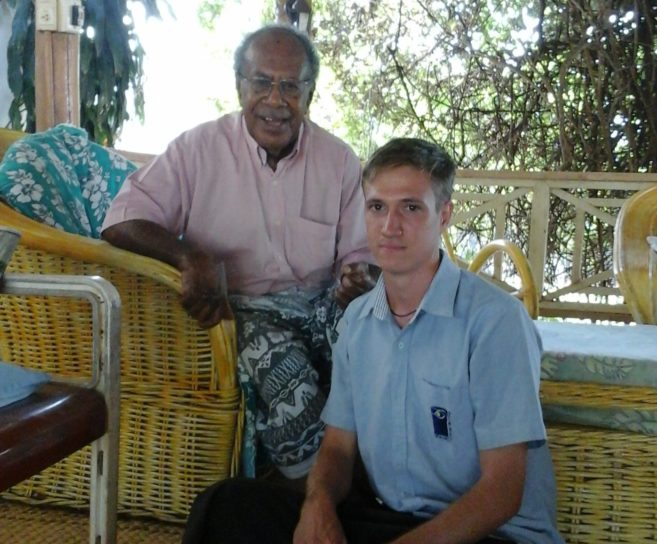 Tom Courtright is a kaivalagi living in Fiji, and tells this particular story for people who are thinking of doing what he has – moving to the Pacific.

There is a term that applies perfectly fine to Western volunteers in Fiji that we never hear, likely because it has gained such divisive and political connotations in our home countries. But it is a literal term that describes our position here, as Westerners in Fiji, in a simple light, and which we can use to take our experience and make it a tool for empathy with the less fortunate in our home countries.

Temporary immigrants, yes. Privileged immigrants, absolutely. But we are Westerners living in Fiji, in this country that is foreign to us, and we are foreigners here. We are kaivalagi, we are gringos, we are wazungu.

As immigrants here, building lives here, we follow the balancing beam of survival and assimilation. Possibly the most powerful way I know to join in daily life is to understand and ultimately speak the language. Yes, English is spoken by most Fijians, and Fijian English has become it’s own dialect of English, but English is a colonial language. English is a tool for survival and adaptation, adaptation to dependency on tourism, adaptation to the reality of a bicultural or multicultural nation.

But Fijian languages, including Fiji Hindi, Standard Fijian/Bauan and the hundreds of local dialects, are how the majority of Fijians live their lives. Fijians can best explain themselves and their culture in their own language, like anyone. How do you translate a word like loloma? I say its community love, but that description misses much of it. Languages can only be understood by listening to them day-in day-out for months, years even, because they explain and describe very specific cultural environments. They explain the environments we seek to call home here.

This language-learning is a difficult task, to be certain. Most Westerners are raised in monolingual environments, and the Spanish or French classes we take in high school are mostly rote memorization and partner dialogues about donde esta la biblioteca when all you’re trying to do is get your older sibling to buy you liquor and talk to that cutie in your math class. Living in Fiji, however, everything we learn about the language is reflected in our day to day living.

Growing up in Tanzania, my biggest regret far and away is not learning better Swahili. I could greet and ask prices, but little beyond that. As a result, I cannot say I really have much of an understanding of Tanzanian culture beyond the surface. Pacific islanders whom move to New Zealand, Australia or America speak English and as they are often under some economic stress are forced to integrate to various degrees in their new communities. Westerners in Fiji, on the other hand, can live in Pacific Harbor for 15 years and not know anything about Fiji beyond “Bula” and “there were cannibals here”. That is privileged immigration.

To learn Fijian languages shows Fijians you consider their language, culture and way of life important, worthy of preserving. As they recently finished the third McDonalds in Fiji but have yet to build a Bulaccino in America, this is a worthwhile task.

We’d like to thank Tom for making the time to talanoa with us. For the last two years, he’s lived in Fiji while volunteering and working on a dictionary of the Sabeto language, “among many other things”. He is  pictured above with Momo Avisai Tora, the chief of Natalau village.