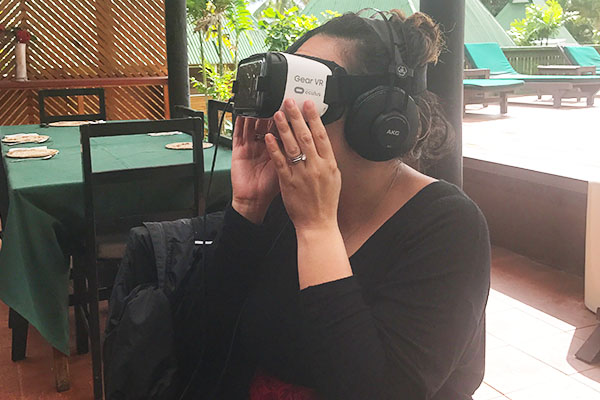 First of all, what is Virtual Reality (VR), and how does it work? My friends at S1T2, an Australian creative technology agency that specialises in virtual reality, explain it perfectly:

“Virtual reality is a new technology that allows you to transport (your audience) into a new world or… to live experiences they would otherwise be unable to have… virtual reality puts you in the middle of the action, where you can look anywhere, and see everything in 360°. The result is a powerfully immersive experience that stays at the forefront of your mind long after the virtual reality experience is over.”

I’ve known about VR for a few years – my first impression was that it was built for crazy video gamers – and that it would eventually phase out until the next gadget hit the market. Slowly, I realised I was wrong. Industries outside of tech started to pay attention to VR, and people couldn’t stop talking about how it would change the world. But would it change mine? Someone who is completely focused on Pacific storytelling?

One thing I constantly say when talking about Pacific storytelling, is the importance of allowing people to tell their own stories – with their own voice and on their own terms. As a writer, I do my best to bring richness and colour to the imagination of readers, with the intention of sharing the essence of each and every storyteller that sits down to talanoa with me. There have been countless moments during talanoa sessions where I’ve thought, and even said out loud, “I wish our audience could meet you! I wish they could see what I see, and connect with you too.” I never thought that VR could be the answer.

That all changed the day I put on a VR headset for the first time, to watch Clouds Over Sidra, a film about the Syrian refugee crisis. For the first 30 seconds, I looked everywhere I possibly could, fascinated by the fact that I could literally do a 360 and see everything around me. But when the scene changed to introduce Sidra, a 12 year old Syrian girl sitting in what appears to be her bedroom, I was completely captivated. Within seconds of her telling her story, I realised that what I thought was her bedroom, was the temporary home for her family of 8, in a refugee camp in Jordan.

I followed her to school, visited the camp’s bakery, stepped into an all boys computer room and mens gym that she wasn’t even allowed to herself, played soccer with her, and met children from around the camp. I was completely lost in the story, connected with Sidra. While I’d never truly know what it feels like to be a refugee, and may never have the opportunity to visit a refugee camp, the VR technology made me feel as if I was there myself, walking through the camp, forming a connection with young Sidra and the people in her community.

Since then, I’ve watched several other short films and played a game in VR. Initially, I’d wondered if the fascination would wear off once I got used to the technology. But two years after watching Clouds Over Sidra, I am still completely taken by VR and it’s ability to communicate a story by transporting me to totally different world.

Imagine what this could do for Pacific communities, places where storytelling is a way of life? The possibilities, and list of potential stories, are endless. I’m a firm believer that technology like VR can be used for social good, especially when it comes to Pacific storytelling. Of course, greater technology such as VR comes with responsibility, such as the protection of privacy and anonymity of storytellers, especially the most vulnerable. But that’s why I think that now more than ever, Pacific storytellers should know and learn of  VR, so that we can sit in the drivers seat for projects that involve this kind of storytelling, especially those that are geared towards benefiting our own communities.

For example, people are already turning to VR to help invigorate endangered Pacific languages, demonstrate the Price of Conflict (and the) Prospect of Peace, and more recently – two projects that I’m proud to be a part of – to empower children in the Pacific to rediscover healthy eating through culture, and to push for stronger global action on climate change at next week’s COP23 Climate Change conference.

With the rise of technology and the surge of it’s presence in the Pacific, it’s only a matter of time before the use of VR is commonplace. The challenge for us Pasifikas right now is embracing this new technology as a tool for change, championing ethical and culturally sensitive ways of working with local storytellers to avoid exploitation, and thinking of creative ways to engage with audiences so that they keep their VR headsets on, and immerse themselves in our world. Because more than anything, I know that once a Pacific storyteller captures an audience, they have the ability to open minds, eyes and hearts to change perspectives and to persuade action – and that’s what makes VR so powerful as a medium of storytelling for the Pacific.

In a few days, I’ll be sharing my latest storytelling project, which combines talanoa and cutting edge 360° VR technology to tell Fiji’s story of climate change. The project is called Our Home, Our People and is produced by the Fijian Government, COP23 Secretariat and the World Bank, in partnership with the Global Facility for Disaster Reduction and Recovery (GFDRR) and VR specialists, S1T2. As an itaukei Fijian, I’m immensely proud to be a part of this project as the lead writer, and to see this launch at COP23 in Germany.

What’s in a Name, When it Comes to Talanoa?