Monica Waqanisau and Life with Vitiligo 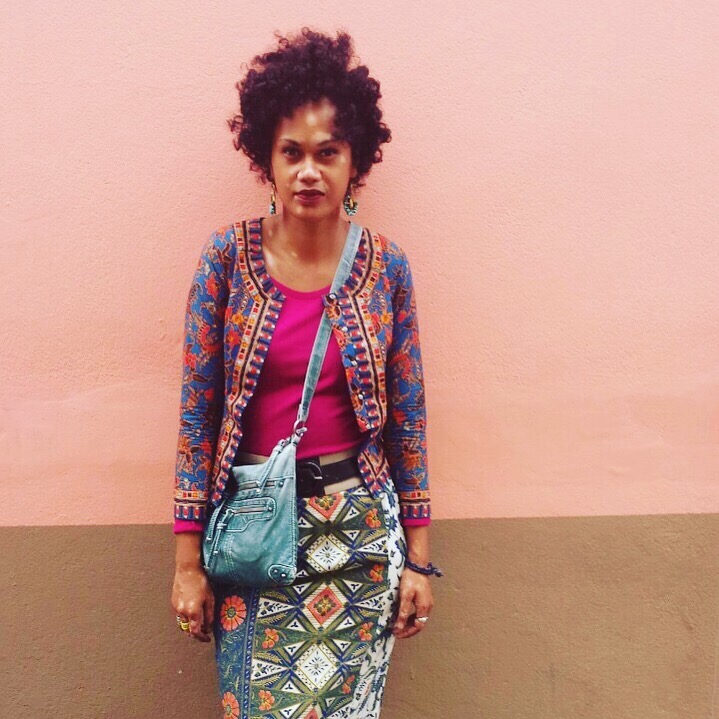 If I had to answer this question on the surface I would answer ‘from Suva’ but of course the Pacific custom is to start from where my parents are from, this is essentially where my narrative begins – my parents. My name is Monica Waqanisau, I am the youngest of six children to Salote and Jeremaia Waqanisau. Both my parents are from the Lauan group of islands, my mother from a small village Vakano from Lakeba and my father from another small village Vunuku on the island of Moala.

They were born and raised in their respective villages on their islands in Lau and later sent to Suva by their parents to live with relatives as they continued with their education. This is a common narrative and one both my five siblings and I grew up hearing in various forms – the struggles they endured and how we had to make better and ensure that those struggles were worthwhile. I grew up with that appreciation for education and trying to better myself by always learning and pushing forward despite life’s obstacles. In fact I credit both my parents for my first impressions of resilience.

Most of my formative years growing up were spent in Fiji but my family moved around a lot as my father progressed in his career from a military officer to a civil servant and lastly as a diplomat. So I have been very fortunate to grow up as a global citizen, in fact I feel more a global citizen than just a Lauan kid from Suva. Thanks to my dad’s career I was exposed to diverse cultures growing up and that coupled with my father’s very strong emphasis on making yourself better and always looking at giving back, both moulded my professional leanings now.

I graduated from the University of the South Pacific with an undergraduate degree in Law in 2011 and wanted to do something out of the usual mainstream of legal practice. With a keen interest in Human Rights and Gender I went on to working for women’s human rights as a researcher in women led NGOs (non-governmental organisations) in Fiji.

My professional and personal narrative for me is very intertwined. I do the sort of work that I do because I’m very passionate about what I work to achieve. As a person, I am a moving jumble of contradictions but thankfully the experience of age has made me more comfortable in that as well. 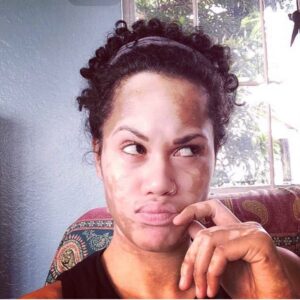 What is Vitiligo, and when and how did you journey with Vitiligo begin?

Vitiligo is an auto-immune skin condition where skin loses its pigment in patches. There is no other adverse reaction to the body other than the skin losing its pigment, for most people this occurs in patches on their body. Overall, vitiligo is an anomaly as a skin condition or disease as some might refer to it, because there is no known cause to it. Some people get it at a very young age while others like me get it later on in their life. Some have attributed it to the body reacting to stress or trauma of some sort and some as a reaction to certain foods in ones diet but overall not much is known yet on why it occurs to some people.

My journey with vitiligo (viti-lie-go) began in early 2014, with white spots on my hands and abnormally pinks lips, which I took to be some sort of adverse sunburn. Understandably I was initially scared when I saw the patches that began developing first on my hands and face. My skin condition had been developing since mid-2013 but I only summoned the courage to visit a dermatologist in early 2014. From there on my journey with this condition began, first with familiarising myself with simply pronouncing viti-lie-go, to bracing myself for what was in store in terms of the physical changes ahead.

What do you think we can do to better understand Vitiligo and the experiences of people who experience it?

I think the best thing anyone can do is – cultivate more empathy. We don’t have a lot of that going around and we could do with more empathy in the world. Empathy for others who on the surface may look, talk and dress differently, but inevitably, we’re all people.

It’s too easy to judge people and write them off at first glance, to judge them at face value. In fact its human nature at first instinct to do that and I catch myself doing that as well sometimes and check myself when I do.

Empathy reminds us to step back and evaluate why we might be reacting in a way to someone, disallowing ourselves avenues to establish some personal connection. All we have to do is start by not treating someone who looks different, differently.

My vitiligo has progressed significantly since it started in 2014, so I definitely don’t get stared at as often or as rudely as I did when I had visible patches of white on my brown face then. For me my skin became sort of a canvass to how I was reacting emotionally to my environment. What I didn’t allow myself to show emotionally with others seemed to paint itself on my skin.

Imagine waking up and watching your face, your melanin sun kissed skin just sort of fade. When I look back at the pictures (and I made sure to document the change and share like a care bear in the heart of experiencing all that) it grabs at me how much I was changing physically, unconsciously physically reacting to the usual trials of juggling a career and my personal life. What I refused to admit openly, my skin documented as my colour through days, to weeks and months quickly faded out.

The progression of it sort of reminded me of watching watercolours melt away and disappear with very droplet of water that touches the paper that captures the painting. Perhaps that sounds corny to most but that was how it looked and felt when I looked back at the pictures I was documenting and sharing during the height of my skin’s transformation. 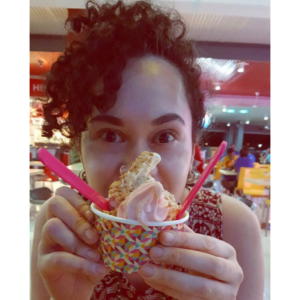 What are the biggest misconceptions? How do you feel we can address them?

Vitiligo first off is not a terminal illness. I think the battle starts with people going through the change, processing it for themselves and then having to deal with how others react to them as they process it including reacting to the condition itself.

My experiences for the most part have been positive. I did encounter a few rude stares here and there when my face was covered in white patches, to overhearing some really dumb things said in reference to my condition. Sometimes it was well meaning, for the most part for my mother when she was processing for herself I think.

There were instances in which I could sense someone was nervous or anxious upon our encounter so I would try and lighten the mood by making a joke of my condition and eventually I stopped doing that and began reminding myself that I didn’t need to. I just had to remind myself to be open, to give people opportunities to know me as a person despite my many contradictions. And for the most part I feel uncomfortable speaking for other people with vitiligo because our experiences may be vastly different, which could be because of our backgrounds or personalities but I try and play my part in sharing on vitiligo in efforts to educate my peers, family and friends about it.

For instance, four years now living with this condition, I have depigmented quite extensively that now some people come up to me and ask me if I’m part kaivalagi as an explanation for why my skin is so fair or pale.

I had a funny encounter at the market the other day when the Fijian lady vendor had to mask her surprise when I asked her in Fijian “e ya vica na pea?” (how much for the avocado?) And as I was walking away with my bag of avocados I could overhear her saying to her fellow vendors “goneyalewa beka ni Lau?” 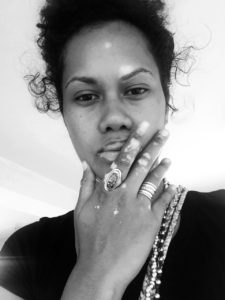 When you look back at your life in 20 years time, what do you hope to be most proud of?

Content in the fact that I continued to live fiercely and authentically and continued to celebrate myself even on the worst days. Even when I wanted to hole up in bed, I had good folk in my corner who reminded me of my substance, to show up. To not be ashamed to cry when I needed to, but show up. To deal.

What advice do you have for young Pacific people in regards to Vitiligo (a young person who is experiencing it, or who may know someone who is)?

Treat your spots, your patches as something to love fiercely. Train your mind to believe that and eventually your heart will follow. Surround yourself with people who love you for you. They will become your stronghold, who will remind you that your value goes beyond your skin.

How can we support you?

By celebrating diversity in beauty with me. By not telling me (and others similar) it’s so great that I am so confident in spite of my skin condition. By not telling me that I’m lucky that it’s evened out now compared to others whose vitiligo may be more prominent. By simply just treating me like everyone else and treating every other person who looks different from your conceptions of ideals as valued. By genuinely celebrating them.

We’d like to thank Monica for sharing her story so honestly with us, and we look forward to following her journey. If you’d like to do the same, the best place to find her is via her social media accounts above.