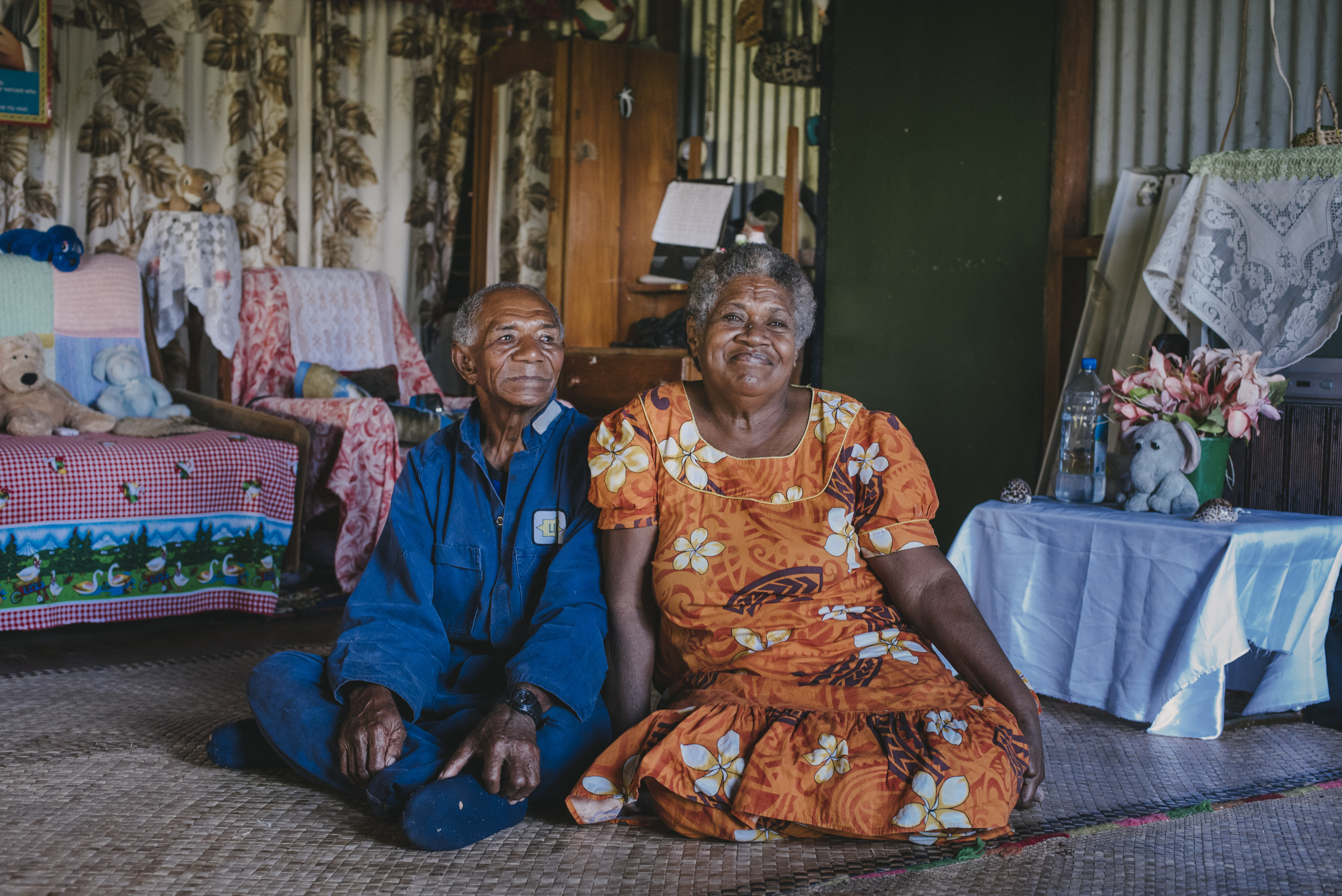 Portrait of Rupeni Vatugata, 75, and his wife Losena Cagi inside their home in Namarai, in Fiji's Ra Province, on the main island of Viti Levu. Namarai was devastated by Cyclone Winston in February 2016. Of the 37 houses in the village, only seven remained upright during the Category 5 storm - Rupeni and Losena's home being one of them. In the 18 months since Winston, Rupeni has dedicated his time to rebuilding the community, volunteering his carpentry skills to construct new homes using the building materials supplied by the Fijian Government. Losena is proud of her husband, but wishes he would spend some time rebuilding their kitchen, which was the only room to be damaged by Winston. It remains unused while Rupeni helps his community.

On 20 February 2016, Tropical Cyclone Winston, the most intense (category five) tropical cyclone in the Southern Hemisphere on record, struck the mainland of Fiji, killing 44 people and injuring countless others.

Hundreds of people lost their homes, with others seriously damaged, including Rupeni Vatugata’s, 74, from the village of Namarai in the province of Ra, on the northern coast of Viti Levu, Fiji’s biggest and main island.

In the early evening of the 20th of February, Government officials called a nation-wide curfew. Rupeni, husband and father of four, says he and his wife didn’t notice any of the usual natural signs of an oncoming cyclone.

“In the morning we didn’t know there would be a cyclone, we came from Suva just to check on our house. In the afternoon when winds started, the disaster office officials came into our village to say the cyclone will come today, and that everyone is to go down to the village hall. After that, I said for my wife and I to pray, prepare, and then we go down. When we were down there, I never thought that my house would be damaged; I had faith in my prayers.”

Having lived through Tropical Cyclone Bebe in 1972, which killed 28 people, Rupeni understood the devastating impact of a tropical cyclone. But nothing prepared him for what he saw during Winston.

“It was scary. The first winds blew from the south. You could only see when you looked outside – it was like a fog – I couldn’t see a single rain drop. That was the strength of the winds, it evaporated the raindrops.

All the children and their families were in the village hall during that time. If you look at the side of the village hall, you can see a huge African tulip tree. The winds pushed the tree into the water. I saw it with my own eyes and I felt the south-easterly winds, and it was terrifying. It picked that tree and brought it down to the village ground.

We saw that houses were being blown away together with its stilts. The roof flew away, together with the posts. Only the soil was left. I’m not sure which part of the world it was blown to. In this village, only six houses remained and about thirty houses were blown away.”

Fortunately, no lives were lost in Rupeni’s village, however the damage left in Winston’s wake was more than physical.

“People were scared and sad because of their belongings. There were no pots, no plates, no cups, no beds and no TV. All the good household items had disappeared during that short span of time.

Maybe in 3 hours all of people’s belongings disappeared, items they treasured in their house.  I don’t like what the cyclone did because it was heartbreaking. Fortunately no lives were lost but there were a few injured. For a week they ate together and 3 months after the cyclone some families lived in the evacuation centre.”

Rupeni an experienced carpenter of twenty years knew what needed to be done. Rebuild needed to go underway immediately, and he quickly assembled and led a team of builders from the community.

“At first, we started building to provide shelter, since there were hardly any houses. Tents came later. We would rebuild our village communally. I was the team leader for rebuilding in the village. Everything went well because we look after each other and work together.”

With tears in his eyes, Rupeni says his biggest motivation to help people is vei lomani, directly translated as love in action. Rupeni’s humility, compassion and hard work aren’t limited to his own community; he’s worked on rebuilding houses in three other villages nearby.

“Some ask me, why do you do it? This is how I live my life, to help others. I have been doing carpentry for over twenty years and I don’t get any payment for it.  I do it out of love and to help those that need their houses built. I’m truly happy. Twelve houses in Naocobau and Namarai have been completed, four completed in Nadavacia and four completed in Saioko.”

With age comes wisdom, and Rupeni has it in spades. When asked why his community has been resilient in their response to Tropical Cyclone Winston, his response is simple.

“Caring for each other. One reason why Fiji is paradise is because it’s a country that cares. I can walk through this door and that door and I’m free to do so. That’s the love we have in this community. It is our gift from God to love each other.”