The Wind That Kills 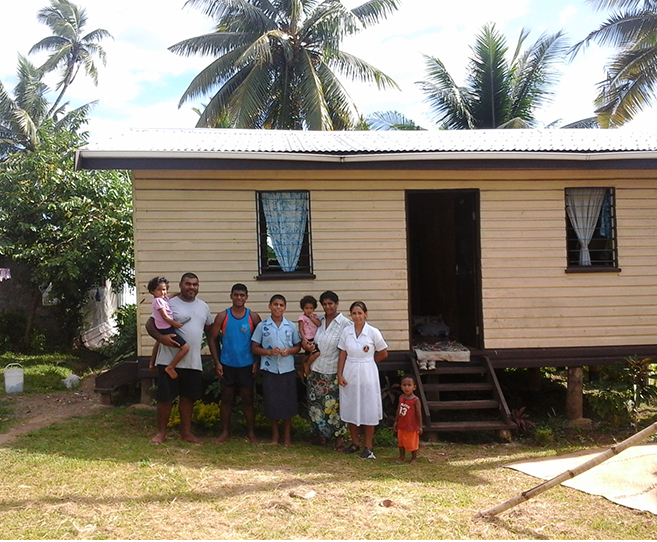 In December 2012, my family and I lived in Sabeto below the hill when our tin house was destroyed by Cyclone Evan. We used to attend Masimasi Primary School which was close to our home.

It was raining when we visited my aunty who was sick in bed. We tried to return home but the river was flooded. We waited at my aunties place. We were surprised that the cyclone was hitting our island.

My eldest brother and my father were watching over our house. They put up tin sheets at the window and tied the roof to an iron rod. My father was lying in the sitting room when he saw the roof start to blow away by the strong wind. He shouted to my brother to grab the blanket and wrap it around them, and they ran outside with the TV, which was the only thing they could take with them.

They ran to the nearest house, which belonged to my uncle who was away with his wife in Tailevu to celebrate their Christmas. They broke in with the help of heavy wind and rain. Inside the house was already half flooded so they sat on the bed. They were wet, cold and hungry, so they took off their clothes and were in underwear. They waited until the cyclone had gone away.

Early that morning they picked some coconuts which had been knocked down by the cyclone, and ate them for breakfast, waiting until we returned. We came back and saw that everything inside the house was damaged and the roof was gone.

My mum, who was five months pregnant, lost her words and just sat down with tears in her eyes. The clothes were wet, the food was ruined and lying on the ground and the floor was covered with water. The roof was gone and the house was open to the sky. My mum’s favorite dish, which she used to put in her cupboard, had been broken by the cyclone.

It took nearly two months to clean up the damage. We stayed at our uncle’s place for a while, our neighbor brought us some food and drink, and some help by the Australian Aid and the government came as well. We stayed there for 7 months until my father said that it is time for us to move on.

We moved to the village and the government built our new house. We have our new neighbors, new schools and also new friends. I had to stay away from my parents for a while to live with my aunty so that it is easier for them to find the pieces of our lost life but it is still hard.

My mum still has to look after my youngest sister, who has heart problems because my mum was traumatized while pregnant with her.

The cyclones are getting stronger because of climate change that is destroying our earth. If we are not to take action about it, more homes will be destroyed and more lives too. Climate change is also causing ocean acidification to increase and rising sea levels. Corals, home to most of our fish, are being destroyed, so we will have less fish to eat in the coming years. We need to stop destroying our climate so that future generations will live in a better world. I hope presidents, politicians and corporations will listen: if we want to survive, we must end greenhouse gas emissions.

– Written by Caroline Turuva, who is an aspiring journalist. She wrote this piece on her family’s personal experience with the cyclone in 2012.

*The word in Fijian for cyclone is cagilaba, which translates literally as “the wind that kills” or “the murderous wind”.

Samuel Tabuatamata, Rugby and Leukaemia: A Story of Survival