One year on: Broderick Mervyn’s journey to the 6th Asian Pacific Youth Parliament 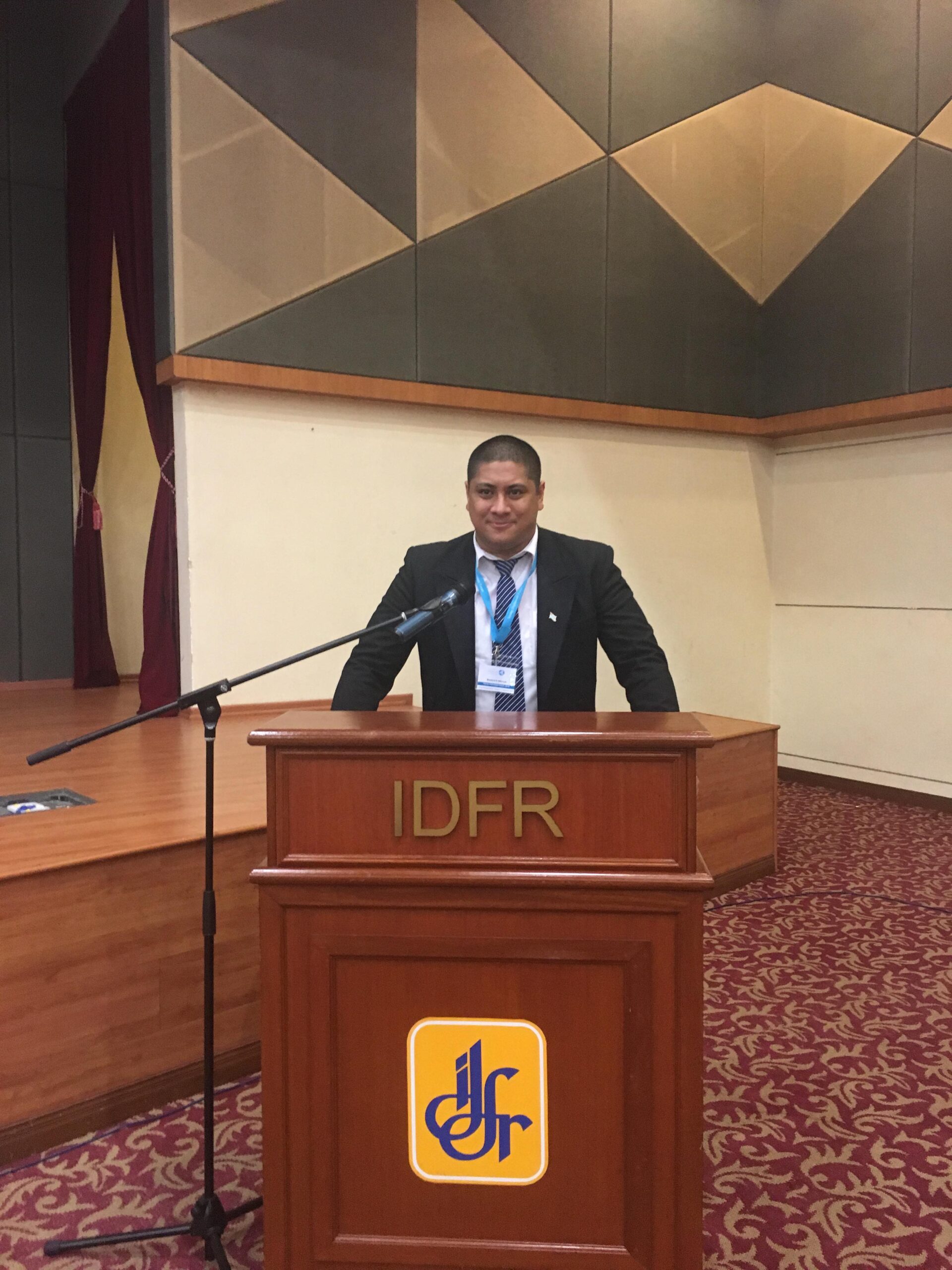 In 2017 we featured Broderick Mervyn, a proud Rotuman man representing at the 6th Asia Pacific Youth Parliament. Since then Broderick has continued to work in youth activism and community decision making. He recently represented Fiji at the 11th Edition of Young Diplomats Forum (YDF) in Kuala Lumpur and took some time out to share with us how his journey in the past year has led him to where he is now.

I understand you carry out a lot of work on youth empowerment and other youth related issues.  How’d you get involved in doing this work?

My journey on youth empowerment started in 2013 after I attended my first workshop in Nadi.

I saw the need to empower youth for a better tomorrow and how it is connected both, to the financial elevation as well as increment of the standard of living.   Awareness is a key factor for this empowerment, with guidance towards developing a wholesome outlook of life. To me, youth empowerment in any development is imperative not only for national development of an entire country but also for personal development of an individual.   Youth empowerment is pursued by promoting youth rights, youth activism and in community decision making. I took an interest as I saw the necessity in instilling values to equip the youths to lead a life that is satisfying to the individual while being in accordance with the cherished values and ideals of the society.  At present it is the most effective mean that society possesses for confronting the challenges of the future.

I have been an active youth leader with an expertise and passion in youth engagement and nonprofit management and have advocated for progressive youth-related policies at a number of international forums and have contributed to empowerment initiatives through youth-led groups.

With our country teeming in youth, with 70 % of people below the age of 40 years, less than 50% of Fiji’s Gross National Income is contributed by the youth; there is a dire need to develop this percentage.  In fact, youth today, is a major resource for not only development of financial prosperity but for social changes as well. Despite holding such importance, millennial often face hurdles on a daily basis, with their energy still not being channelized in the right direction.  This challenge is not restricted to the Government, but also to the entire private section in the country.

Tell me something interesting about yourself?

I describe myself as a relentless idealist and a modern island guy.    I am a proud Alum of the Young Diplomats Forum, Kuala Lumpur 2018 and is extremely optimistic about my affiliation with YDF as a valuable asset and support-member.

Currently, a law student working towards completing a Bachelor’s degree with the University of the South Pacific, Laucala Campus, Suva.   Apart from Law studies, I have also focused my academic research on youth participation. I have taken this expertise into practice by participating as a youth delegate at the summits of the NSLF – Canberra, Australia, COP23 & COY13 – Bonn, Germany, APYPW – Ulsan, The Republic of South Korea, WYSP – Islamabad, Pakistan, JENESYS – Tokyo, Japan, GCED – Busan, The Republic of South Korea, and YDF – Kuala Lumpur, Malaysia.

I have been Youth Volunteer since 2013 and progressed to the President for WYSP and Ignite for Change, a youth-led organization, the mission of which is to encourage young people to become active citizens.  Ignite4Change contributes to inspire young people to be tolerant and broad-minded, use diplomatic skills against any conflict and develop critical thinking and creativity.

The red thread in my life is an inexhaustible curiosity, a drive to expend my horizon.  I try to learn a new language, also, curious towards different cultures and world-views together with the drive to overcome differences, motivated much of my choices in life. 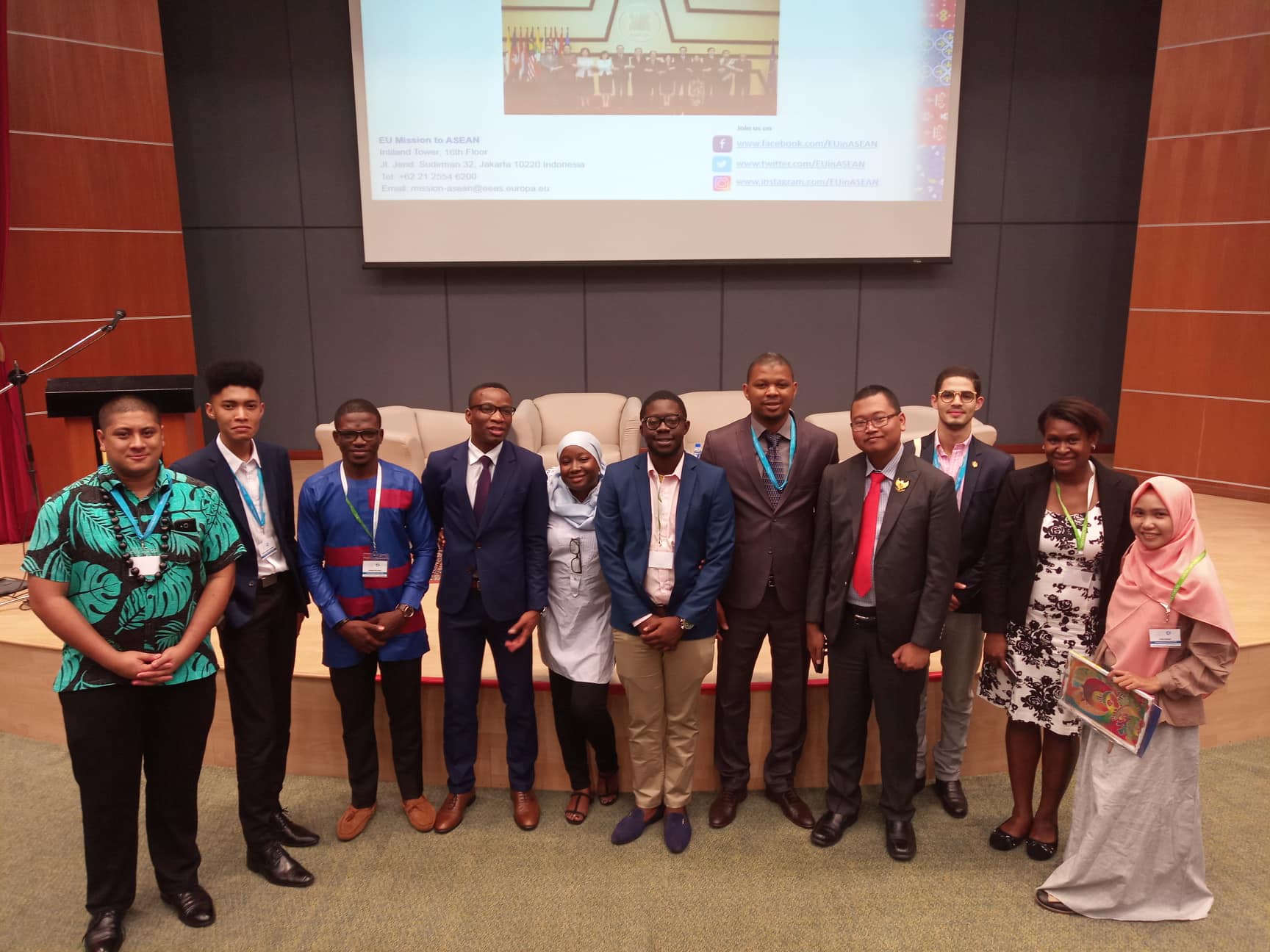 How did your story with representing the Pacific to the Global Diplomatic Forum begin?

The combination of social and political knowledge, an infinite curiosity and the personal drive towards mutual understanding took me to the Young Diplomatic Forum in Kuala Lumpur. The gathering of youth delegates representing different countries, a diversity of young voices, and the perfect chance to network and discuss issues relating to the world we live in was not an opportunity to miss.  I was invited to the same Forum which was held in London in early July this year but had to turn it down due to lack of funding. The second time I received the invitation, I took up the challenge and was glad that partial funding came through to support my trip to YDF. Being the only representative from the Pacific, I was fortunate to be part of Forum where different opinions and ideas were respected.  The forum insisted on tolerance and rejected any form of discrimination hence providing an exemplary model for respect of different nationalities, gender, faith and race.   The activities designed had an impact on expanding access to knowledge and expertise in areas related to diplomacy, which increased my understanding and appreciation of diplomatic routes in conflict resolution, and also enhanced appreciation of understanding and interaction between societies.

You mentioned that you talked about issues faced by the Pacific at the Forum – were these issues unique to the region or was it also shared in other countries as well?

The Pacific Island Region face a range of environmental problems more widespread and more serious than ever before.  Many of the possible most damaging problems are caused mainly by the activities of countries outside the region. The problems of ozone depletion and climate change, domestic waste, fisheries, forest cover, land use and land tenure, soil loss through soil erosion and loss of fertility, water shortage, solid waste disposal, toxic chemicals being imported into islands in increasing amounts, endangered species, sand and gravel – dredging of coral and sand from coastal waters which damages productive fisheries resources and human habitat were some of the issues discussed at the Forum.  In the last two decades these problems have arisen associated with economic development in most if not all the Pacific island countries. Environmental problems in the South Pacific are by no means as severe as in other parts of the world. However environmental issues are likely to be amongst the major domestic challenges for South Pacific governments over the coming decade, as well as continuing to be a major element of regional politics. A comparison of the environmental concerns of small island developing states with those of developed countries showed a profound difference of emphasis, at least in the short term. The pollution resulting from modern technological development is much less important than the need for sustainable management of the natural resource base. Islands are therefore a potential model for the future, facing now what must become the long-term preoccupation of the whole world as resource degradation approaches the limits of the planet. 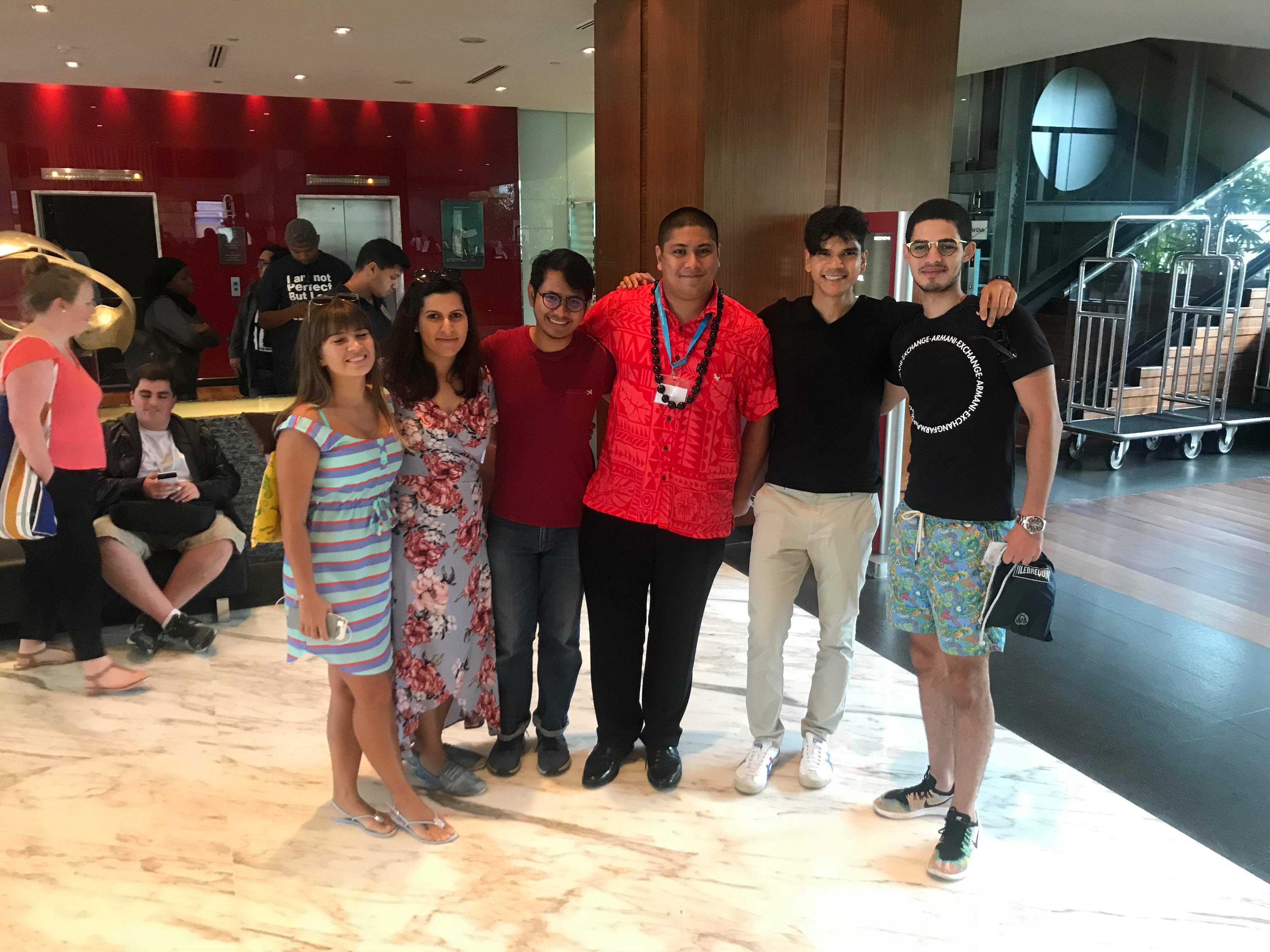 Broderick Mervyn (centre) with delegates from Australia, The Netherlands, Angola, Moldova and Morocco

On the rights of indigenous people – do you think this is an important aspect that is looked into fully?

The United Nations Declarations on the Rights of Indigenous People (UNDRIP) is important to the Pacific where indigenous people are the minority or majority in the region.  I think it is an important aspect that should be looked into fully.  There’s always been the assumption that UNDRIP applied only to indigenous people in countries where they are the minority but in reality the UNDRIP is relevant and applicable even in a region where the indigenous population is a majority. The Declaration obligates the state to protect indigenous people, natural resources, language and culture in any situation.  This is predominantly vital as most of the Pacific island countries have leaders who are indigenous so the assumption has always been that that is sufficient guarantee for the protection of indigenous interests.  That is not often the case. For example, Rotuma under Fiji’s citizenship and electoral laws is also regarded as indigenous unlike the much larger Indo-Fijian community born in Fiji.  The UN has recognized Rotuma as a dying culture and it is on its edge of extinction. From the 15,000 Rotumans around the world, only one-third can speak the language hence listed on the cultures that are endangered.

An annual event such as the Rotuma day celebrated by Rotumans all over the world, is not only where the young generation learn from their elders through songs, chants and dance but also a reminder of the importance of the culture and that participation is vital for the revival of the Rotuman culture.   The Rotuman culture is now included into the education curriculum, however, the learning begins from the homes of Rotuman families.

What are some of the challenges that you face as young aspiring diplomat?

In international events, with diverse group of speakers, highlighting role models from diverse backgrounds and moving beyond gender where diversity is the key driver for improvement – I continue to challenge unconscious bias and ensure that mistakes are not carried into the future.  Mingling with diverse teams with different perspectives, seeking out difference, appreciating and leveraging it. I have learnt to embrace challenges in a foreign country and not shy away or we’ll find our voice is missing and biases will be reinforced for the next generation, if we don’t make a stand now on what we young people believe in.

Young people are the future and they are the now.  It is these young people who will grow to inspire our next generation and continue to revolutionize the world. Everyone has equal opportunities and our young people need to step up and grab platforms that empowers their voices, giving them the opportunity to speak out about topics affecting them, while also sharing stories to inspire other young people in various walks of life.  It is all about being the change that we want to see and engaging more in our community. I wish to acknowledge the Fiji Ministry of Youth and Sports as well as Mr. Jeffery Lin for their contributions towards my trip. I also thank my family and friends for their love and support. 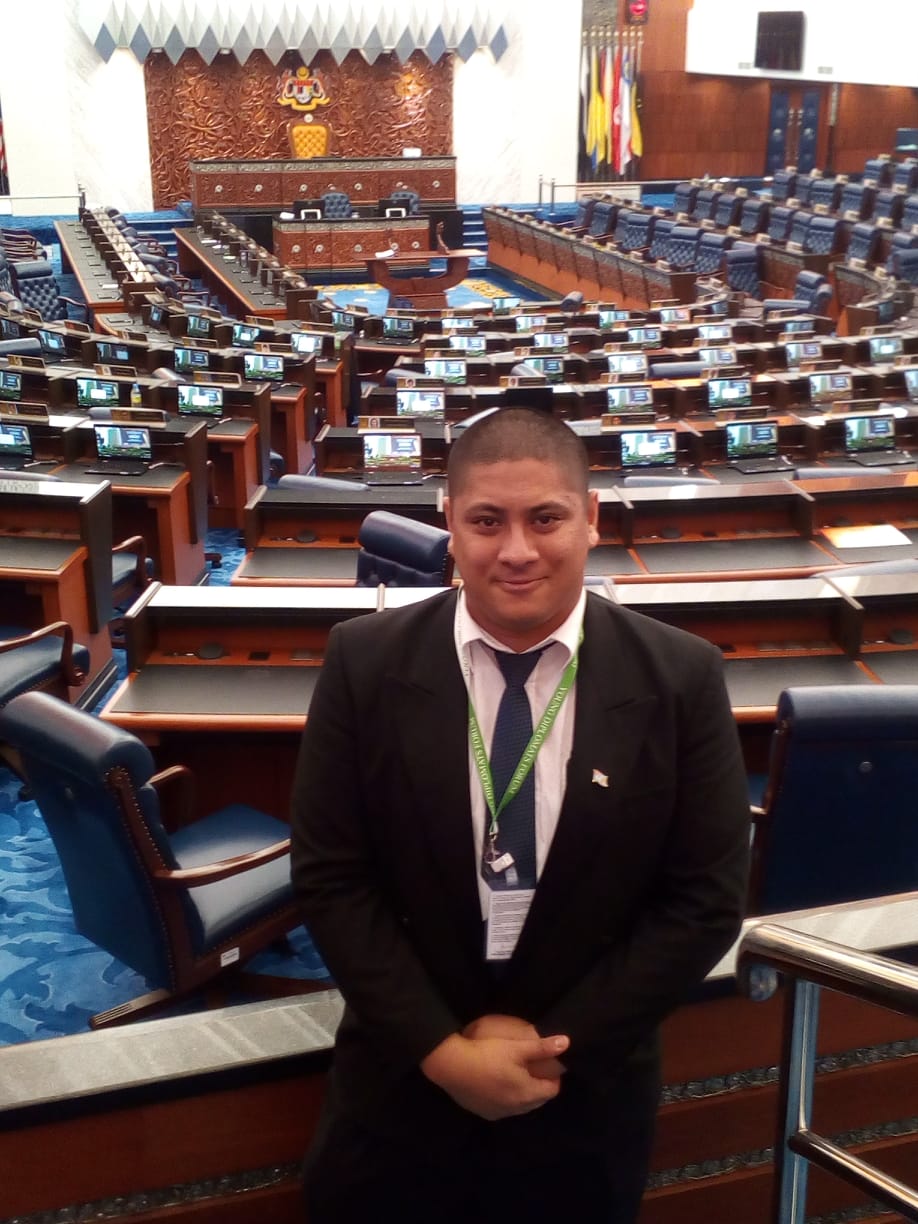 Broderick Mervyn at the Malaysian Parliament.